Find out more here and get detailed information 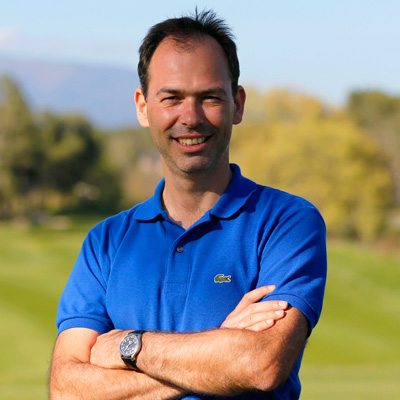 Alain was born in The Hague, The Netherlands and is a proud member of the Royal Hague (Koninklijke Haagsche Golf & Country Club) one of the best golf courses anywhere in the world. From 1993 until the day he turned professional, he played at the highest level as an amateur. During this period he won several national titles. He experienced his best year as an amateur in 2000, winning the National Strokeplay championship and representing The Netherlands during The Eisenhower Trophy, the World Amateur Golf Championships for nations played that year in Berlin. In 1998 he also formed part of the Dutch National team to play the World Championship held in Santiago, Chile.

All his performances were achieved in a time where he combined golf with a study Business Communication in The Hague. After graduating in march 2003 he turned professional and started playing from 2005 – 2010 on several tours, such as, the EPD and Alps Tour with some regular visits to the European Challenge Tour. His first professional win came in 2009 winning the Twente Cup, the oldest tournament of the Dutch PGA.

Play with fun and technique

Some thoughts on the technique

“Golf is (sometimes) difficult and hard but not because of some intrinsic difficulty in the game or a golfers lack of skill, it’s hard because most golfers have a swing that doesn’t fit them.” I firmly believe that anyone is capable of playing golf. With dedication, effort, proper guidance and fun as main ingredients. The way to become a more consistent ball striker is first to identify what the golfer’s poor tendencies are and then work to reduce them as much as they are physically able. My responsibility therefore is to create an efficient golf swing based on the natural ability of the golfer. Although there is no such thing as a - one size fits all swing technique - I do believe there are fundamentals that every player should be able to achieve regardless of age, ability or gender. Those fundamentals are related to the following 4 coaching points:
• Efficient body use, (turn, pivot, weight transfer, rotation);
• Controlling swing bottom;
• Managing face & path through better plane;
• Creating velocity

Focus on the short game

I have always had a great appreciation for and emphasize on having a strong short game. Not only because I personally love every aspect of the short game but because it is has such high impact not only on your score but also on the mental aspect of you whole game. I recommend all my clients to be aware of this by paying more attention to their short game. This can be done, amongst other things, by following my Scoring Zone sessions. Click here for more on this.

The ultimate goal is to instructs my clients so that they will understand their swing, know how to practice more effectively , know how to manage their game on the golf course and how to analyze their performance in order to find the areas that need the most improvement. I truly believe this approach will benefit golfers in the long term. Having a better understanding of themselves and knowledge about their game, focuses them to practice more specifically which ensures them better results and more importantly, a lifetime of enjoyment.

Golf La Roca, Barcelona
+34 638 538 459
alain@arfgolf.com
We use cookies to ensure that we give you the best experience on our website. If you continue to use this site we will assume that you agree with it. / En esta web se usan cookies propias y de terceros con motivos operativos y analíticos.Agree / AceptarMore / Más